The Billion Rand President: A R1m day in the life of President Zuma

FEATURE: The privileges afforded President Zuma by the Ministerial Handbook – VIP protection; jet and helicopter flights; spousal support; etc – cost the taxpayer at least R522 million per five year term, or R105 million per year. If President Zuma is elected for a second term, his cost will escalate above, at least, R1 billion. To better illustrate how these various expenses mount up in practical terms, I have constructed a 24 hour day in the life of the President and then costed his various movements. Our imagined day works out at just over R1.1 million – to see how, read on [VIDEO and graphics included].

The Billion Rand President: A R1m day in the life of President Zuma

The privileges afforded President Zuma by the Ministerial Handbook – VIP protection; jet and helicopter flights; spousal support; etc – cost the taxpayer at least R522 million per five year term, or R105 million per year. If President Zuma is elected for a second term, his cost will escalate above, at least, R1 billion.

That works out at an average of R282 000 a day. But in real life, the amount will fluctuate, depending on what he is doing. Likewise, it is difficult properly to appreciate how these sorts of costs break down in practical terms and so, to better illustrate them, I have constructed a 24 hour day in the life of the President and then attached the costs related to his various movements.

The day I have imagined, runs from Thursday midnight through to Friday midnight and, in narrative form, involves the following: The President wakes up at midnight in New Delhi India, where he has been on a state visit. He is driven to the airport, to his personal jet (Inkwazi) and from New Delihi, flies back to Johannesburg OR Tambo for official business. He drives through to the Union Buildings in Pretoria in his Blue Light convoy and there attends to some official business. At midday he travels to Mahlamba Ndlopfu, the official residence in Pretoria, where he hosts an official reception. After that, he carries out some other official business before travelling back to OR Tambo for a flight down to King Shaka airport in Durban. He wishes to weekend at home. From King Shaka he travels, again in a Blue Light convoy, to John Dube House, one of the four other official residencies. From there he travels by helicopter to his private residence in Nkandla, where he spends the weekend.

So, how would that break down by time? Here is the imagined Presidential Diary for the 24 hour day:

That might not be your average day in the President’s life but it certainly is a plausible one.

Now, to the costs. In order to generate the costs per 24 day and per hour, I have relied upon that information previously set out in the article ‘The Billion Rand President’. I have not set out the calculations here, but should anyone be interested I am happy to expand upon them. In order to be concise, I present here only the final figures. Some of these are per 24 hour day (Zuma’s salary, for example, would be paid to him regardless of what he was doing) and some per hour (flying Inkwazi, for example).

Here, then, is how much such a day would cost.

• Hotel: On his last state visit to New Delhi, India, President Zuma stayed at the Taj Mahal Palace Hotel. A night there (for him and the First Lady) costs approximately R25 000.
• Allowances: The President and the First Lady would have received a combined overseas allowance of R1 390 per day in India.
• Ferry Flight: Because Zuma chartered a flight to New Delhi, Inkwazi was flown over to meet him and return him to South Africa (this is called a Ferry Flight). The average cost of such a flight is R86 206. This is the most conservative average of all the figures because the jet itself would have to be flown to India.
• Inkwazi: The Presidential Boeing was estimated to cost R43 000 per hour to operate in 2003. Today estimates run to R80 000 per hour. I have used R60 000 per hour as a conservative amount. A ten hour flight from New Delhi (with a 3h30 time difference) to Johannesburg thus costs R600 000.
• Vehicle: The President gets two official cars at the cost of R2011 per day. He would travel to Pretoria in one of these, accompanied by a convoy and VIP protection.
• Salary: Including benefits, the President’s salary costs R12 256 per 24 hour day.
• VIP Protection: It costs at least R32 876 per 24 hour day to protect the President.
• Official Residence: There are five official residencies. Each 24 hour day, they cost R14 520 to maintain and run.
• First Ladies: It costs at least R42 513 per 24 day to support the First Ladies.
• Inkwazi: A one hour trip down to Durban in Inkwazi would cost R60 000.
• Helicopters: It costs at least R60 000 per hour to operate an Oryx Helicopter. Typically two fly to Nkandla and the flight is two hours, for a cost of R240 000.
• Nkandla: The state is obliged to provide security for the President’s private residencies (which include things like helicopter landing pads). That security costs R3 506 per 24 hours. 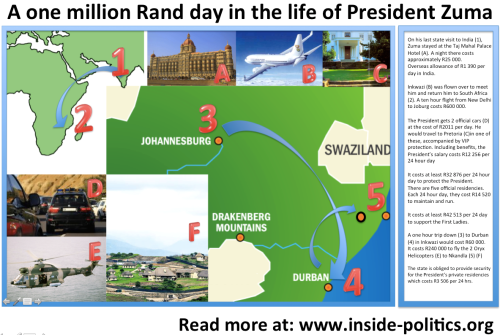 [To enlarge image, right click on it and select ‘view image’]

So, a more precise breakdown of the costs involved in such a day would be as follows:

And that is what a R1.1 million day looks like. Remember, these costs are incredibly conservative. The real cost of such a day would no doubt be much higher.