SERIES: Some light reading for a Friday: 10 interesting numbers from current affairs and politics that tell a story. Did you know the Free State Government is spending some R15 million in 2012 to upgrade Free State premier Ace Magashule’s house? For this fact and a range of other curious numbers, read on. Below the graphic is the full list of numbers and, in each case, the source from where they originate. 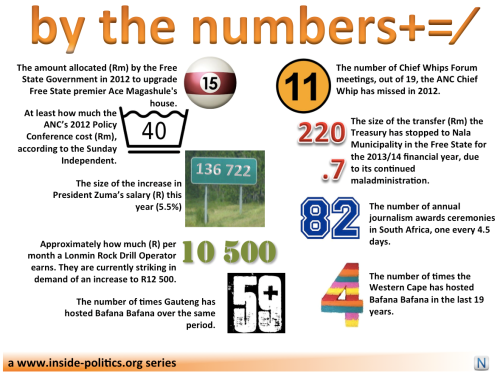 [To see the graphic full scale, right click over it and select ‘view image‘]

• 11. The number of Chief Whips Forum meetings, out of 19, the ANC Chief Whip has missed in 2012.
• R220.7 million. The size of the transfer (63% of its budget) the Treasury has stopped to Nala Municipality in the Free State for the 2013/14 financial year, due to its continued maladministration.
• 82. The number of annual journalism awards ceremonies in South Africa, one every 4.5 days.
• 4. The number of times the Western Cape has hosted Bafana Bafana in the last 19 years.
• 59. The number of times Gauteng has hosted Bafana Bafana over the same period.
• R136 722. The size of the increase in President Zuma’s salary this year (5.5%) from R2 485 839 to R2 622 561.
• R11 394. How much more money the President’s increase works out to per month.
• R10 500. Approximately how much per month a Lonmin Rock Drill Operator earns. They are currently striking in demand of an increase to take their salary to R12 500.
• R40 million. At least how much the ANC’s 2012 Policy Conference cost, according to the Sunday Independent.
• R15 million. The amount allocated by the Free State Government in 2012 to upgrade Free State premier Ace Magashule’s house.

Leave a comment and tell the author what you think