SERIES: By the Numbers is a new series – a collection of 10 interesting numbers from current affairs and Inside Politics articles. I shall try to run it each Friday (if not every Friday then most Fridays) – hopefully, some more light-hearted reading for the end of the week. Below the main graphic, I have linked to the source of as many of the numbers as possible. 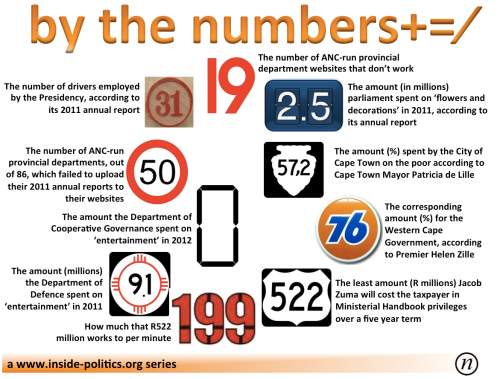 [To see the graphic full scale, right click over it and select ‘view image‘]

• 19. The number of ANC-run provincial department websites that don’t work.
• 2.5 million. The amount parliament spent on ‘flowers and decorations’ in 2011, according to its annual report.
• 57.2% The amount spent by the City of Cape Town on the poor according to Cape Town Mayor Patricia de Lille (R10.8 billion out of an R18 billion budget)
• 76% The corresponding amount for the Western Cape Government, according to Premier Helen Zille.
• 522 million. The least amount in Rands Jacob Zuma will cost the taxpayer in Ministerial Handbook privileges over a five year term.
• 199. How much that R522 million works to per minute.
• 9.1 million. The amount the Department of Defence spent on ‘entertainment’ in 2011.
• 0. The amount the Department of Cooperative Governance spent on ‘entertainment’ in 2012.
• 50. The number of ANC-run provincial departments, out of 86, which failed to upload their 2011 annual reports to their websites.
• 31. The number of drivers employed by the Presidency, according to its 2011 annual report.