How much government spends on entertainment

FEATURE: Every annual report has a line item called ‘Entertainment’ which, according to the Treasury, can include everything from lunches through to gifts and something called ‘Private Entertainment’. So, how much does government spend in this regard? R77 million in two years is the answer. To see who the biggest and smallest spenders are and, importantly, how national expenditure compares to the Western Cape and other provinces, read on. If anything, it is at least an entertaining read.

How much government spends on entertainment

The manner in which annual reports are set out is determined by legislation prescribed by the National Treasury. Fundamental to that is a document called ‘The Standard Chart of Accounts’ (SCOA).

SCOA sets out exactly how every item listed in an annual report is defined, so that the various administrations know what to list under each line item and what not to list.

In 2009, a new definition for a category was introduced by the Treasury for each annual report (the way annual reports are structured is pro forma) – ‘entertainment’ – which, according to the relevant Circular, was to be re-defined as follows:

Entertainment: This item includes entertainment expenditure incurred by members of the Senior Management Service (SMS) as well as Ministers and his/her office bearers in performance of their duties.

Such expenditure includes, but is not limited to:

(a) Luncheon meetings held with colleagues, foreign delegations and/or other individuals in and outside the public sector; and
(b) Purchase of dinner during authorised overtime, if no compensation in the form of time off or additional pay is approved, provided that the closing time is later than 20h00. (Chapter 7 of the PSCBC Resolution No. 3 of 1999 – paragraph 3.1 (b)).

This item does not include, but is not limited to, spending on:

(a) Gifts (including flowers) to individuals;
(b) Private entertainment;
(c) Cost of meals claimed by individuals when away from home on official duty;

The line item ‘Entertainment’ can be found in the Financial Statements chapter of any annual report. In a section called ‘Notes to the Financial Statement’, in which those bulk items referred to in the accounts are disaggregated in detail, one such bulk item is called ‘Goods and Services’ and, within it, are a series of prescribed subsections which include a line item ‘Entertainment’.

It seems reasonable to allocate an amount of money to Senior Management to ‘entertain’ key stakeholders. Much business inside and outside the private sector is done informally and, when meeting a key stakeholder about business over a meal, it makes sense that the business (in this case, government) should pay.

At the same time, in a political environment often defined by executive excess, it makes sense too that the amount should be reasonable and, in every case, well justified. Because it involves some sort of subjective consideration – when does business start and stop over a meal? – it needs to be carefully monitored.

So, how much does the national government spend in this regard? The following table, based on the national annual reports for the 2010/2011 financial year, sets it all out. 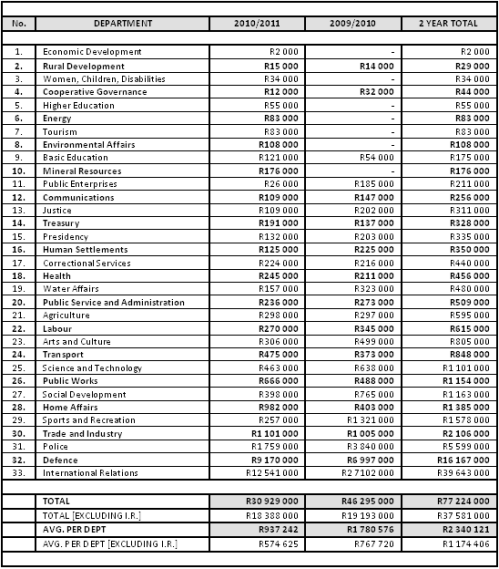 (ASIDE: In a newspaper story on this blog, Beeld created this graphic for this table, which demonstrates the proportional spending quite well.)

For the most part, the national departments seem to fair very well. A number at the top of the table were only recently created and so do not have figures for the 2009/10 financial year. But even then, most seem to have spent relatively little.

The big three do have large staff compliments – the police and defence force, as well as the diplomatic corps – and so there is perhaps a plausible explanation for their huge spend. Although the fact that the figures fluctuate so widely year-on-year suggests that explanation would be an interesting one (and probably most plausible when it comes to International Relations; after all, the foreign diplomatic corps  is all about ‘relations’).

Perhaps events such as the Police Department’s infamous ‘national police day’ are the reason behind Police’s big spend (in 2008/09 it spent a whopping R16.5 million). Something for the DA to explore, perhaps by asking each department to explain fully their expenditure before the Standing Committee on Public Accounts (SCOPA).

I understand the DA’s shadow spokesperson on Defence, David Maynier, is going to put a parliamentary question to Minister Lindiwe Sisulu about her department’s budget in this regard. So watch this space.

Remember too, the Treasury SCOA definition does allow departments to categorise under this item gifts (including flowers), ‘private entertainment’ (this is the really interesting category, a definition so broad it seems to lend itself to abuse) and meals away from work, at its own discretion. So, it would be interesting to know what percentage of each department’s total spend is spent on these such items, as opposed to the more formal wining and dining of key stakeholders.

Outside of those three, departments such as Trade and Industry (one of the smallest departments in terms of its staff component – around 400 people) would do well to explain why they spend a million a year on entertainment. Likewise, I would think Home Affairs, Social Development, Science and Technology, Transport and Public Works should perhaps be asked a similar question.

Sports and Culture can perhaps be forgiven for the R1.3 million it spent in 2009/10. No doubt it had something to do with the World Cup.

Significantly, even excluding International Relations, there was a decline in entertainment expenditure from 2009/10 to 2010/11, which is to be commended.

An obvious point of comparison is the Western Cape, the only province governed by a party other than the ANC. It fairs very well (and remember, the Western Cape employs some 77 000 people, so the argument that it has a smaller staff component – especially with regards to Health and Education (which have thousands of doctors and teachers as employees) – does not stand.

The table below sets out the Western Cape expenditure on entertainment for the 2009/10 and 2010/2011 financial years.

The total amount spent by the entire Western Cape, across 12 departments, in the 2010/11 financial year is roughly equivalent to the amount spent by the national department of Trade and Industry, R1.1 million. Its average per department across the two years – approximately R94 000 and R100 000 respectively – remains remarkably low. Like national government, there has also been a reduction in the Western Cape, which is to be commended.

Human Settlements is a new department and thus has no figure for 2009/10.

The fact that the Western Cape alone is the only province where these figures are easily avaliable says much about its committment to accountability and transparency. The same cannot be said of the other, ANC-run, provinces.

However, it was possible to put together some figures for random departments across the other eight provinces, where their reports were available for the two years in question.

The top 10 of those figures suggest the DA’s spend in the Western Cape is not only frugal but probably the lowest in the country. Consider the following spend by other individual ANC-run departments.

It is true that a number of other ANC-run provincial departments did spend very little (indeed, some spent none at all) and that this is to be commended, but those incidents were more often than not offset by some of the huge figures set out above. One way or the other, it is not possible to determine the exact nature of the full picture, simply because more than half of the reports were not available.

That the Eastern Cape education department features is interesting, given that department’s financial woes.

In closing, a word on perspective. In the big picture these amounts are small. Remember these departments often have billion Rand budgets. But that doesn’t mean they shouldn’t be interrogated or justified, and some of the numbers do seem excessive. And, determining the amount spent on things like ‘gifts’ and ‘private entertainment’, is probably where the most important justifications are likely to be found.

Die Burger, Beeld and Volksblad ran a hard news story on this blog. See here to read it.